Model: The MSI GE73 8RF-211DE - Raider RGB is under the MSI GE series, which has always been a cheaper alternative to the GT series. In addition to the powerful processor, it also offers a powerful NVIDIA GeForce GTX 1070 graphics chip, although the whole is not much thicker than the average multimedia notebooks. The computer's body is black and quite decent. By default, it can be clearly understood that this is a gaming laptop because the backlight of the keypad plays all the colors and makes different color transitions across the keys. Something similar happens on the outside of the lid. Fortunately, these effects are adjustable and a user can change them both in static colors or turn it off. The computer has 419 x 287 x 33 mm (419 x 287 x 33 mm) in its closed state, which does not differ fundamentally from conventional 17" laptops. Powerful hardware and its larger coolers were at a weight of 2.94 kg. The computer still provides acceptable mobility, although it probably will not be the preferred choice of people who travel with the computer every day. The GE73 8RF features a matt TN screen with good contrast and fast response times. MSI's innovative Matrix Display supports up to 2 external displays simultaneously through 1x HDMI port and 1x Mini DisplayPort 1.2. Multi-task is made possible even during competitive gameplay. A user can connect the laptop to HDTV display. Matrix Display supports 4K output with a resolution up to 3,840 x 2,160 pixels. The MSI Matrix Display technology creates an ideal environment for extreme gaming experience and pleasant multimedia entertainment.

The GE73 is powered by a Core i7-8750H (Coffee Lake) hexa-core processor. It is a mobile chip with a TDP of 45 watts, but it can be briefly increase to 90 watts. The processor operates at a base clock speed of 2.2 GHz. The clock speed can be increased to 3.9 GHz (six cores), 4 GHz (four cores) or 4.1 GHz (one or two cores) via turbo. MSI incorporated a solid-state drive, a powerful processor, and a dual-channel enabled working memory to ensure a snappy system. MSI furnished the model with an M.2-2880 SATA-III SSD from Toshiba with a storage capacity of 256 GB out of which around 191 GB are available to the user. The storage required for a gaming notebook is provided by a 1 TB 2.5-inch hard drive. As for RAM, the GE73 has two 8 GB SO-DIMM DDR4-2400 RAM, which adds up to 16 GB. The left side is equipped with a pair of audio connectors (input, output), one USB-C (3.1 Gen2), classic USB 3.0, video outputs (mini-DisplayPort, HDMI) and a LAN connection. On the right side, user will find a pair of USB 3.0, an SD XC memory card reader and a power adapter socket.

NVIDIA GeForce GTX 1070 (Laptop): Pascal based high-end mobile graphics card based on a cut down GP104 (like the GTX 1080) and GDDR5 graphics memory. Successor to the GTX 980M with a 10 Watts higher TDP. Similar to the desktop GTX 1070 performance wise, but with more shaders and lower clock speeds.

8750H: On Coffee Lake architecture based processor for big and heavy laptops. Integrates six processor cores clocked at 2.2 - 4.1 GHz (4 GHz with 4 cores, 3.9 GHz with 6 cores) that support HyperThreading. Manufactured in an improved 14nm process (14nm++). » Further information can be found in our Comparison of Mobile Processsors. 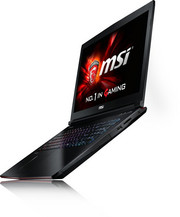 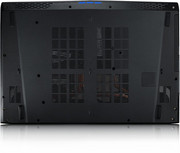 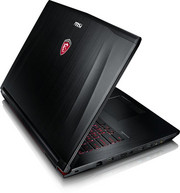