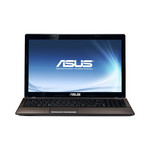 Reviews for the Asus K53E-A1

ASUS tries very hard to make the K53E-A1 a compelling system based primarily upon is appearance. It certainly looks like a much more expensive system but functionality is certainly just as important. In this sense, there isn't much that ASUS does to separate it from many other $600 laptops.
Single Review, online available, Short, Date: 10/20/2011
Rating: Total score: 60%