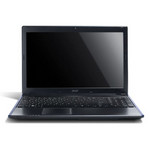 The Acer Aspire 5755 retails at a price of Rs. 29,354 and comes pre-installed with Windows 7 Home Basic. Build quality and battery life was average, but it is quite cheap as compared to the Lenovo G570, which has similar specs. The 5755 will appeal to people wanting a no-nonsense, no-frills notebook. As far as design is concerned, the all-metal finish of the Lenovo Z570 could appeal more to some. However, on its own the Acer Aspire 5755 is a decent buy.
Single Review, online available, Very Short, Date: 09/17/2011
Rating: Total score: 70%