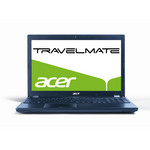 Business notebooks are a unique breed, and it’s the TM5760’s lack of uniqueness that lets it down. It feels like a basic notebook with strong security software on it rather than a hardcore business notebook fit for use in a demanding enterprise environment. Acer makes some genuinely great products, but this isn’t one of them.
Single Review, online available, Short, Date: 09/21/2011
Rating: Total score: 60%