Without further ado, here are the full names of the aforementioned video cards by ZOTAC:

As usual, the prices will vary depending on the market and retailer. However, ZOTAC has mentioned that the GAMING GeForce RTX 3080 Ti cards will hit the market on June 3 and the RTX 3070 Ti on June 10. However, the AMP Extreme Holo models should surface in early July. 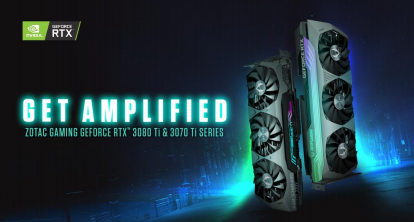 Powered by the NVIDIA Ampere architecture, the GeForce RTX 3080 Ti delivers an  incredible leap in performance and fidelity with acclaimed features such as ray  tracing, NVIDIA DLSS performance-boosting AI, NVIDIA Reflex latency-reduction,  NVIDIA Broadcast streaming features and additional memory that allows it to speed  through the most popular creator applications as well.

Award, AMP Holo models deliver factory overclocked performance out of the box,  and feature an aurora-like holographic finish allowing the lighting paths underneath  to shine through. The Dynamic RGB lighting can be customized with the FireStorm  utility enabling the changing of colors and lighting modes.

Trinity adheres to a minimalist design that balances aesthetic with functionality. The  reinforced metal backplate emphasizes the RGB lighting infused into the carved paths adding additional detail and airflow.

The ZOTAC GAMING GeForce RTX 3080 Ti Series take the cooling performance to the  next level by taking advantage of a 3-slot thick aluminum heatsink sectioned in up to  3 groups to fully enfold the copper heatpipes for optimal thermal conductivity. A new

and improved heat pipe layout is utilized in a more densely packed space, adding up  to 72% more direct contact over the GPU than previous generation models to  transfer heat more quickly away from the core.

Additional enhancements to performance and lifespan include the FREEZE Fan Stop and Active Fan Control features that allow the ZOTAC GAMING graphics cards to be  more efficient and quieter. FREEZE stops the fans when the GPU is idle, while the  Active Fan Control allows users to adjust fan rotations independently.

Users can fine-tune and monitor the GPU in real-time with FireStorm, customize or  synchronize the effects of individual lighting zones, adjust the fan speed, and more.

The AMP Extreme Holo features a Dual BIOS controlled via a soft-switch FireStorm.  Users can switch between QUIET mode for lower noise and slightly higher  temperatures or AMPLIFY for lower temperatures and faster fan speeds.

Behind the piercing stare of the robotic eyes, lies the strength and future technology that fills the ego of the  undefeated and battle experienced. Founded in 2017, ZOTAC GAMING is the pioneer movement that comes  forth from the core of the ZOTAC brand that aims to create the ultimate PC gaming hardware for those who  live to game. It is the epitome of our engineering prowess and design expertise representing over a decade

of precision performance, making ZOTAC GAMING a born leading force with the goal to deliver the best PC  gaming experience.

ZOTAC's new ZBOX Q-series PC is touted as an ultra-slim pro-grade workstation 05/24/2022
ZOTAC VR GO 4.0 launches as an "industry-leading wearable PC" 05/24/2022
Zotac ZBox Magnus EN173080C will be one of the smallest mini PCs equipped with GeForce RTX 3080 graphics 01/05/2022
ZOTAC ZBOX C series mini-PCs upgraded to Intel Tiger Lake-U processors with Thunderbolt 4 support 08/23/2021
Nvidia and Bethesda's new bundle gets you a GeForce RTX 3080 Ti at MSRP and a few other goodies, but only 300 people can buy it 06/23/2021
Thorough Nvidia GeForce RTX 3080 Ti testing in Unreal Engine shows it to be more of a hot and loud brass RTX 3090 than a cool and quiet titanium RTX 3080 06/17/2021
The Nvidia GeForce RTX 3080 Ti's hash rate limiter also targets other mining algorithms 06/05/2021
NVIDIA launches RTX 3080 Ti — a scaled-down RTX 3090, for US$1,199 and RTX 3070 Ti for US$599 06/01/2021
AMD Radeon finally has something to fight against GeForce RTX 3080 laptops. Now the trick is just getting it out there 06/01/2021
Full RTX 3080 Ti reference specs revealed by GPU-Z validation plus some Ashes of the Singularity scores 05/28/2021
First Nvidia GeForce RTX 3090 Ti references spotted in latest Zotac FireStorm overclocking utility 05/19/2021
ZOTAC GeForce RTX 3060 showed off by crypto miner on YouTube; hash rate limitations may be linked to the BIOS, not just to software drivers 02/18/2021
ZOTAC antagonizes an army of gamers as it promotes a parade of Gaming GeForce RTX 30 Series White Edition cards as ready for crypto mining duties 02/17/2021
ZOTAC intros two NVIDIA GeForce RTX 3060-based video cards 01/14/2021
EVGA and ZOTAC raise the prices of the NVIDIA GeForce RTX 30 series by an average of 10% over MSRP with a peak increase of US$350 01/13/2021
First impressions of Cyberpunk 2077 running at 1440p and 4K on the Zotac Gaming GeForce RTX 3070 Twin Edge: DLSS is needed to prevent a slideshow 12/10/2020
static version load dynamic
Loading Comments
Comment on this article
OLED iPads inbound despite recent s...
Next-gen Exynos chip, confirmed to ...
Codrut Nistor - Senior Tech Writer - 5624 articles published on Notebookcheck since 2013
In my early school days, I hated writing and having to make up stories. A decade later, I started to enjoy it. Since then, I published a few offline articles and then I moved to the online space, where I contributed to major websites that are still present online as of 2021 such as Softpedia, Brothersoft, Download3000, but I also wrote for multiple blogs that have disappeared over the years. I've been riding with the Notebookcheck crew since 2013 and I am not planning to leave it anytime soon. In love with good mechanical keyboards, vinyl and tape sound, but also smartphones, streaming services, and digital art.
contact me via: @online_digi, online.digital.craft, LinkedIn
Please share our article, every link counts!
.170
> Notebook / Laptop Reviews and News > News > News Archive > Newsarchive 2021 06 > ZOTAC intros the GAMING GeForce RTX 3080 Ti and 3070 Ti Series
Codrut Nistor, 2021-06- 1 (Update: 2021-06- 1)