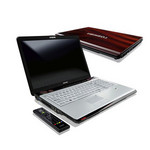 Reviews for the Toshiba Satellite X200-20s

The two 160GB hard drives also offer plenty of storage space for most laptop users. The X200 also supports connection to a, b, g and n wireless networks, features a switch to activate Wireless LAN and a 1.3Mp webcam.
Combining quality, durability and style the Satellite X220 gives more established gaming notebook manufacturers a run for their money. It comes up trumps with its high WorldBench and FEAR scores and is a joy to use. This is topped off by a high resolution 17in screen of exceptional quality alongside a powerful processor and generous hard drive capacity and memory.
(von 5): 4, Verarbeitung 4, Ausstattung 4, Preis/Leistung 4, Leistung sehr gut, Display ausgezeichnet
Single Review, online available, Short, Date: 11/28/2007
Rating: Total score: 80% price: 80% performance: 90% features: 80% display: 95% workmanship: 80%
90% Toshiba Satellite X200-20s Laptop Review
Source: Pocket Lint

Toshiba notebooks have long fallen into two distinct camps: there are those machines for the office worker and then there is the amazing Qosmio line of machines aimed at the high-end multimedia user. However, Toshiba has never played in the gaming end of the notebook market, until now that is. The Toshiba Satellite X200-20s may be the company’s first gaming machine but it takes its styling more from it’s Qosmio line than the likes of rival gamers, such as Dell or Alienware. For instance, while the unit is rather boxy with plenty of depth for the cooling fans to handle the high-end components inside, the look is more sophisticated than the average game machine. The lacquered lid and the placement of the stereo speakers above the keyboard makes this look more like a multimedia machine for the home rather than a gamer in the bedroom.
9 von 10, Display gut, Leistung mangelhaft
Single Review, online available, Short, Date: 10/15/2007
Rating: Total score: 90% performance: 50% display: 80%