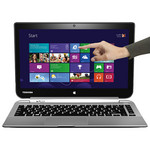 Reviews for the Toshiba Satellite W30t-A-101

The W30T does have its strong points, including an attractive screen and good battery life. However, its size and weight in both tablet and laptop modes is a clear weakness, and the W30T will struggle to compete against the many slimmer, lighter laptops and tablets that are now available.
Single Review, online available, Very Short, Date: 03/27/2014
Rating: Total score: 70% price: 70% performance: 60% features: 60% workmanship: 80%
60% Toshiba Satellite W30t
Source: It Pro

The Satellite W30t isn’t Toshiba's first detachable Windows 8 device. It enters the market where devices such as the HP EliteBook Revolve 810 and the Lenovo Yoga Pro 2 are already available. It's hard to recommend the W30t. If money is tight, buy another tablet and a good-quality keyboard – if not, spend a little more on a higher-quality machine like the Lenovo.
Single Review, online available, Medium, Date: 03/03/2014
Rating: Total score: 60%
50% Toshiba Satellite W30T-A-101 review
Source: Trusted Reviews

Companies have tried to solve the hybrid issue in many different ways, but few have nailed it – and Toshiba isn’t the first firm to fall short when it comes to crafting a device that’s just as effective in both tablet and laptop modes. The weight, width and thickness of the screen means that the Satellite is uncomfortable to use as a tablet for any length of time, and the system is top-heavy in laptop mode – and the Toshiba’s poor keyboard makes us loathe to use it as a system for serious work.
Single Review, online available, Medium, Date: 02/18/2014
Rating: Total score: 50% price: 60% performance: 50% features: 50% display: 50% mobility: 70% workmanship: 50% emissions: 70%
60% Two batteries, two parts and too clever for its own good
Source: Techradar

Hybrids occupy a strange space in the market between tablets and laptops, and the Toshiba suffers by having one foot in both camps – it's a competent machine, but its heavyset design and mediocrity in key departments makes it difficult to recommend, with dedicated laptops and tablets doing each job with more aplomb. If you need a hybrid, though, the Lenovo Yoga 11S is a better choice despite its slightly slower processor: it's slimmer and lighter, looks better, and has a slick folding mechanism – and that's not to mention the bright, high-contrast screen or the excellent keyboard.
Single Review, online available, Short, Date: 01/31/2014
Rating: Total score: 60% price: 60% performance: 80% features: 60% workmanship: 60%

With the increasing popularity and demand for tablet/laptop hybrids, Toshiba has released their Toshiba Satellite W30t-A-101 in order to contend for the top spot. The hybrid comes equipped with 4th generation Intel core i3-4020Y processor, making it one of the top tablets in terms of raw processing power alone. To top it off, it also comes with a 500 GB hard disk which can be replaced with a 256 GB SSD as well as 4GB DDR3 RAM. And if that was still not enough, the tablet hybrid has an integrated Intel HD Graphics 4200 further enhancing the graphics of this machine. One thing is for certain, unlike many hybrids, this tablet is certainly capable of heavy load.

The size however is leaning towards the bulkier side. The tablet measures 331.2 by 214.95 by 14 mm and weighs more than a kilogram making it twice larger than most conventional tablets. On the bright side, because of its larger size and heavier feel, it feels much stronger than other tablets. Even though the tablet comes with an integrated graphics card, unfortunately Toshiba did not capitalize on this. The 13.3”screen comes with only 1366 by 768 resolution making it very average. Although the IPS panel is capable of producing good quality color and pictures, it still lacks in some aspects.

In conclusion, the Toshiba Satellite W30t-A-101 is definitely capable of being a workhouse with more than average specifications with at the cost of being bulky and heavy. If you can overlook this, this device will be able to serve you well.

Intel HD Graphics 4200: Processor graphics card in some of the ULV Haswell CPUs with 20 EUs (GT2).

62.5%: Such a bad rating is rare. There exist hardly any notebooks, which are rated worse.