Reviews for the Toshiba Portege Z10t-A2111

As I said in the opener, I’m not convinced the world really needs laptops with detachable displays. If you really want a notebook that can behave like a tablet, I think Lenovo has a better idea in its Yoga 2 Pro. Lenovo’s machine, on the other hand, doesn’t have an active digitizer or pen. In the end, Toshiba’s Portege Z10t is the best detachable I’ve seen, and anyone who’s sold on the detachable concept will dig it.
Single Review, online available, Very Short, Date: 04/30/2014
Rating: Total score: 70%

The Toshiba Portege Z10t-A2111 is another hybrid attempting to break the tablet market. Combining a convenient tablet form-factor that attaches to a keyboard dock instantly giving you an ultraportable laptop; this is a very good device for those of you that are constantly on the road.

The 11-inch hybrid sports a 4th-generation Intel i7 processor, 8 GB RAM and a 256 GB solid-state drive (the most expensive configuration), a powerful enough combination to handle most things you will do with it. It will boot up in less than 10 seconds and programs open up within a snap. The integrated Intel HD can handle high-definition movies and some light gaming, Its battery life will give you roughly around 6 to 8 hours, which is around the same with other laptops in its category.

It has a textured back panel so that you can get a nice grip in tablet mode. The speakers are positioned at the bottom and while it isn't the best speaker around, docking it with the keyboard might block the speakers and produce a muffled sound just like some other laptop-tablet hybrids. The keyboard doesn't have a solid look and seems rather shallow. This might affect typing comfort and speed.

Overall, most of what you pay goes to its impressive internal hardware and hybrid versatility, but it comes with what seems to be poor audio and an uncomfortable keyboard.

Intel HD Graphics 4200: Processor graphics card in some of the ULV Haswell CPUs with 20 EUs (GT2). 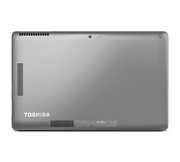 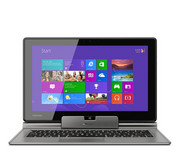 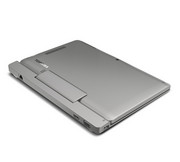 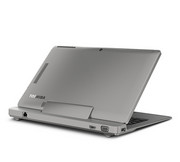 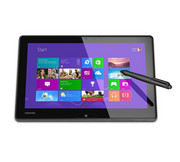 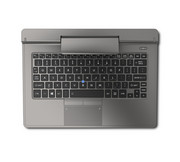 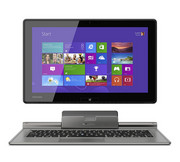