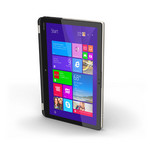 Toshiba has a winner on its hands with the Satellite Radius P55W. This attractive multimedia notebook gives solid performance and can go from work to play and back again with the flip of a hinge. You probably won't use this system in tablet mode often, but it's nice to know you can kick back with a touch-screen game or watch a flick without the keyboard getting in the way.
Single Review, online available, Long, Date: 08/20/2014
Rating: Total score: 80%
60.% Toshiba Satellite Radius P55W-B5224
Source: Wired Magazine

Toshiba’s new Satellite Radius “2-in-1″ convertible laptop may not revolutionize the category, but if you’re looking for a large-screen laptop that can convert to a full slate, you could do worse than the Radius P55W-B5224, provided you don’t need bleeding-edge performance.
Single Review, online available, Very Short, Date: 08/14/2014
Rating: Total score: 60.%

The Toshiba Satellite Radius P55W is a 15-inch convertible with enough power to handle most work-related tasks. There are five modes to choose from: traditional laptop, tabletop, tablet, presentation and audience.

It's equipped with a 15.6” screen that supports 10-point multi touch. The FHD 1080p display uses IPS technology. Watching videos on this device will be a joy with the nice viewing angles and color reproduction of the IPS technology together with the high-resolution.

The P55W is powered by a i7-4510U 2.0GHz processor with Intel HD 4400 Graphics accompanied by 8 GB of RAM. The specs are more than enough to run most productivity and work software while being able to play your FHD movies and play some newer games at medium settings. The downside is the 1 TB hard drive which only runs at 5400 rpm. An SSD would have increased performance greatly, but would have also increased the price.

Toshiba claims that the battery can last up to 8 hours of mixed use, which judging from the processor seems to be a pretty fair claim. The convertible weighs about 5 pounds (2.27 kg), which makes it a pretty heavy tablet but it gets the job done.

4510U: Haswell-based ULV dual-core processor clocked at 2.0 GHz with Turbo Boost support up to 3.1 GHz. Offers an integrated HD Graphics 4400 and a dual-channel DDR3 memory controller.» Further information can be found in our Comparison of Mobile Processsors.