Toshiba sells the Satellite M840 for a price of Rs. 41,000, a bit expensive considering the kind of options available in the market. It’s one of the cheaper notebooks running a Core i5 processor. You’ll find other notebooks with a slightly slower processor but with better design and better graphics performance for the same price. The HP Pavillion G6 that we recently reviewed is a good example of that. If CPU performance at a low price is all you’re looking for, then this Satellite M840 will suit you well.
Single Review, online available, Medium, Date: 07/09/2012
Rating: Total score: 60%

2450M: Dual-core processor based on the Sandy Bridge architecture with an integrated graphics card and dual-channel DDR3 memory controller. The CPU is clocked at 2.5 GHz (Turbo Boost 2.8-3.1 GHz) and the GPU at 650 (1300 MHz Turbo). 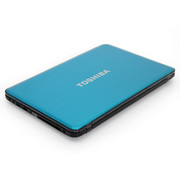