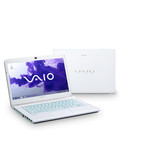 Reviews for the Sony Vaio SV-E14A2S7C