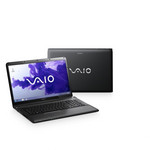 Reviews for the Sony Vaio SVE14A2V2RS