Reviews for the Sony Vaio SV-E14A16FG

Sony's VAIO E Series 14P has a good CPU and discrete graphics, making it a worthwhile laptop to consider if you want to do serious work, but it does have a very glossy screen, which could get irritating. Its design is interesting, but a little bulky, and Sony is the only vendor we've seen to ship keyboard overlays with some of its laptops, so this model will defintiely stand out with its purple keyboard.
Single Review, online available, Long, Date: 07/16/2012
Rating: Total score: 70%

3612QM: An Ivy Bridge-based quad-core processor clocked at 2.1 GHz with Turbo Boost support up to 3.1 GHz. Offers an integrated HD Graphics 4000 GPU running at 650-1100 MHz on a dual channel DDR3 memory controller. The speciality of the i7-3612QM is the low TDP of 35 Watt compared to 45 Watt of the other Ivy Bridge quad core CPUs (e.g. 3610QM).» Further information can be found in our Comparison of Mobile Processsors. 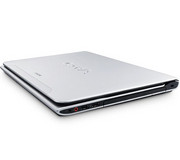 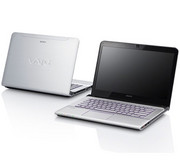