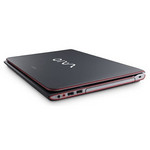 Reviews for the Sony Vaio SV-E14A15FNB

The Sony VAIO SVE14A15FNB is priced at Rs.55,990, which puts it up against the Asus K55VM and the Toshiba L850 in terms of pricing. The latter two feature quad-core Ivy Bridge CPUs that do really well in tasks like video encoding, so if you do a lot of that, we recommend you pick the Asus K55VM over the Sony. However, the new E-series is very good for media playback, especially due to the higher resolution screen. It’s also a bit smaller, is more portable, has a much better keyboard that’s backlit, an ambient light sensor for the display, and great design and build quality.
Single Review, online available, Short, Date: 06/27/2012
Rating: Total score: 75%