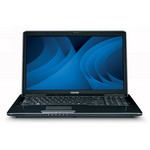 Reviews for the Toshiba Satellite L675D-7106

Archive.org version
You can say that the Toshiba Satellite L765 is a desktop made portable. For the power it has is comparable to a desktop but its surprisingly lightweight build is a treat for those who like to bring their laptops to work or anywhere else. Overall, The Toshiba Satellite L765 is a very robust and fantastic laptop for general usage. This is a great device for students and it will be also useful for the entire family.
Single Review, online available, Short, Date: 05/22/2011

P860: Mobile 3-core CPU based on the desktop Athlon II X3. Due to the missing level 3 cache and the slow clock speed not really well suited for gamers.» Further information can be found in our Comparison of Mobile Processsors.