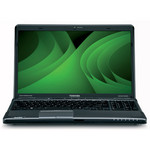 Reviews for the Toshiba Satellite A665-S6100X

Despite its lackluster graphics performance and mediocre battery life, the Toshiba Satellite A665-S6100X is a solid choice for anyone seeking a 15-inch laptop based on the latest Intel technology. The inclusion of a Blu-ray drive and WiDi technology give this latop some serious multimedia cred, and the price is right. If price isn't a factor, the MacBook Pro 15-inch and Dell XPS 15 (Sandy Bridge) laptops offer superior performance, game-worthy graphics, and many more features.
Single Review, online available, Short, Date: 04/15/2011
Rating: Total score: 70%