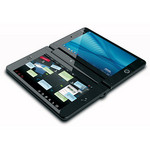 Reviews for the Toshiba Libretto W105-L251

There's been plenty of buzz for the high-concept Toshiba Libretto W100 series since it was first announced in June 2010. This dual-touch-screen minilaptop is a limited-release showpiece designed by Toshiba to celebrate the company's 25th anniversary in the mobile computing business, and is best seen as an experiment that pushes the boundaries between laptops, tablets, and portable media players. Toshiba's dual-touch-screen Libretto W105 is a fun, quirky experiment, but it's still more of an expensive executive toy than a practical PC.

U5400: Entry level dual core CPU of the Arrandale series. Does not support Turbo Boost (for the CPU), Hyperthreading, Virtualization and AES. Due to the slow clock speed, the performance is only sufficient for non demanding applications.» Further information can be found in our Comparison of Mobile Processsors.