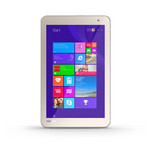 Reviews for the Toshiba Encore 2 WT8-B264

If you're already invested in the Windows ecosystem, or just want to get a feel for the Modern UI, this is a device to consider. Overall it's an affordable Wi-Fi-only tablet for media consumption, web browsing, and playing games. Just keep in mind that you won't be productive with it ... but then again, how productive are we with tablets anyway?
Single Review, online available, Very Short, Date: 09/04/2014