Reviews for the Toshiba Encore 2 10.1 inch

In terms of an affordable 10-inch full Windows 8.1 tablet there's plenty of good to be taken away from the Encore 2, making it a genuinely viable purchase. The screen provides good angles of view with limited reflective qualities, while the new slim build is a step forward for the series. Add microSD expansion for easy file transfer between devices, Microsoft Office and - should you want to buy one - an optional keyboard and the Encore 2 would be our preference ahead of a Chromebook. But it's not a leap forward in the way it could have been - and budget Chromebooks are short of the mark, so hardly shining praise.
Single Review, online available, Short, Date: 09/22/2014
Rating: Total score: 70%
70% Toshiba Encore 2 review: This Windows 8 tablet goes easy on your wallet
Source: PC World

The Toshiba Encore 2 is an attractive choice if you're looking for an affordable 10-inch Windows tablet. For just $269, you get a slim and well-designed slate that runs Windows 8.1 with just enough horsepower to handle word processing, browsing the Web and streaming music simultaneously. A one-year subscription to Office 365 makes it an even better deal.
Single Review, online available, Long, Date: 07/14/2014
Rating: Total score: 70%

The Toshiba Encore 2 from the Encore series features an Intel Atom Z3735G, which is a 64-Bit microprocessor designed to run basic functions. It is often used in small budget notebooks and consumes very little power. This particular processor is quad-core and can clock up to 1.83 GHz.

The Encore 2 runs Windows 8.1 and Office 365, which should be more than enough for the average user. It should be noted that Office 365 has a one-year limit. The 10.1 inch device is sturdy and very light at only 0.63 kg (1.2 pounds). The display has a 1280 x 800 pixel resolution and a 149 ppi pixel density. The Encore 2 has wide viewing angles and features vivid colors and crisp details.

The faux-aluminium case looks pleasing and gives it a more expensive look. In addition, the Encore features a 5 megapixels primary camera with autofocus and a 1.2 megapixel front camera. This may not be high quality enough for some avid picture takers.

It has 1 GB of RAM and 32 GB internal memory. The memory can be expanded to up to 128GB. The device can be used to run multiple tasks simultaneously without lagging. However, don't expect it to run too many at once with 1 GB of RAM. It can last up to 7 hours while connected to WiFi, which is decent for a notebook. 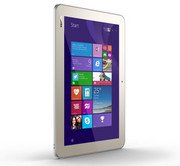