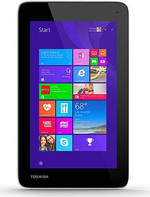 Archive.org version
Even though $199 might seem like a good price for a budget Windows tablet, we find it hard to recommend this tablet simply because the screen — you know, the entry mechanism for a tablet — is so poor, offering a barely usable experience that can’t possibly make the case for owning a portable touchscreen computer. We’re stumped, we really are, because a tablet should be much better than this, and there is already solid competition in the budget Windows slate market.
Single Review, online available, Very Short, Date: 01/29/2015
Rating: Total score: 50% price: 50% performance: 60% features: 40% workmanship: 50%

As opposed to the numerous android tablets out there, the Toshiba Encore Mini runs on a Windows 8.1 OS. Windows offers a host of apps that enable the viewing of video and pictures, internet browsing and other daily tech functions. At the core of the tablet is a quad core Intel Atom processor for tablets with Intel Burst Technology 2.0 that can clock a speed of 1.33 GHz that can hit 1.83 GHz with burst technology. There is 16 GB built in memory and 1 GB DDR3L RAM that can clock up to 1.3 GHz and a micro-SD card slot. There are two cameras in the tablet, a 2 MP rear camera and a 0.3 MP front camera. This tablet is within the extremely affordable range and will be attractive for those on a budget.