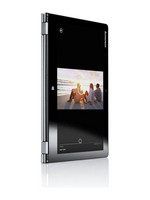 I’m a fan of Lenovo’s Yoga range, but for $1749 I expect a great display and ergonomic design as standard. The Yoga 3 doesn’t deliver on either count. In fact, it doesn’t really deliver on the Yoga concept at all: it’s too bulky to use effectively as a tablet, while limited connectivity and a middling screen make it a poor laptop. I suggest you check out the Asus Zenbook UX303LA instead: it’s faster, better-looking and far more refined.
Single Review, online available, Very Short, Date: 10/20/2015
Rating: Total score: 60%
75% A 2-in-1 worth considering for mainstream users
Source: Tech2.in.com

The Lenovo Yoga 3 14-inch model is priced at Rs 86,990 which may seem like a high price. But the appealing factors for this laptop include the slim form factor and light weight, which will come at a premium. This immediately makes it a laptop to consider for business as well as mainstream users. The battery life is good enough to last you through an entire work day and the processor is powerful enough to let you do things beyond just regular web surfing and watching videos.
Single Review, online available, Medium, Date: 08/05/2015
Rating: Total score: 75% performance: 75% features: 80% display: 70% workmanship: 80% ergonomy: 80%
80% Lenovo Yoga 3 14
Source: Digital Versus

Rather than update its 13" Yogas for 2015, Lenovo has introduced a new 14" model. The range now comprises three Yogas in all: an 11-inch (the Yoga 3 11), a 13-inch (the Yoga 3 Pro) and this 14-inch (the Yoga 3 14), which we're reviewing here. The Yoga 3 14 is a versatile convertible laptop that's easy to carry around and has long battery life. Its only major issues are overheating and unfaithful screen colors.
Single Review, online available, Medium, Date: 07/10/2015
Rating: Total score: 80% performance: 60% display: 60% mobility: 80%
Lenovo Yoga 3 (14-inch) review – a powerful convertible that you can actually afford
Source: Laptop Media

Just like its predecessor, the Lenovo Yoga 3 (14-inch) is available at a quite reasonable price for the features it offers. The build quality isn’t the best out there, but it definitely delivers more than expected, again for the given price. Hinges are a bit overtighten and yet again, the screen wobbles when using the touch panel and this might be our only major complaint in the design department. However, it’s good to consider the fact that the unit we have reviewed here is a testing sample, so the final unit might be lacking this issue. It’s rare to come across a device in this class that features IPS panel so this can be considered as a great plus, but don’t get your hopes too high as our tests show poor color gamut coverage leading to inaccurate color reproduction and furthermore – screen flickering across all brightness levels.
Single Review, online available, Medium, Date: 07/02/2015

As for the graphics card, it runs on the standard Intel HD Graphics 5500, which is powerful enough for everyday tasks. Additionally, the convertible laptop comes with an HD webcam that can capture up to 720p and JBL speakers certified by Waves Audio. The interfaces includes two USB 3.0 ports, one USB 2.0 port, an SD card reader, a Micro-HDMI port and an 3.5 mm audio combo jack. As for connectivity, it has a standard 11ac WiFi card with Bluetooth 4.0. Finally, the Yoga 3 14 achieves a battery life of up to 7 hours of continuous usage.

The Thinkpad Yoga is a series of ultrabooks manufactured by Lenovo. The Yoga Series was launched during 2012, and its successor, the ThinkPad Yoga 2, was released in the 4th quarter of 2014. Yoga laptops are made to be as light, thin and portable as possible, targeting the young and tech savvy consumers. The Thinkpad Yoga stands out due to its unique feature of being able to fold flexibly up to 360 degrees to switch to a tablet mode.

The Yoga Series started out in the end of 2012, with the Yoga 11 and Yoga 13 models, which are 11 and 13 inch respectively. Yoga 2 Pro was the second generation to be released end of 2013, a 13.3 inch model that is significantly lighter than the Yoga 13. The latest model to be released in the series is the Yoga 3 Pro, released recently at the end of 2014. This new model is even thinner and lighter than all its predecessors while maintaining the 13.3 inch size, although due to a more powerful processor the battery life is slightly reduced to just under 6 hours. Besides the ultrabooks, there are also the IdeaPad Yoga Tablets, which come in 8 inch and 10 inch models as well.

5500U: Broadwell-based ULV (ultra low voltage) dual-core processor for notebooks and ultrabooks. Offers an integrated HD Graphics 5500 GPU and is manufactured in 14 nm.» Further information can be found in our Comparison of Mobile Processsors.

73.75%: This rating is bad. Most notebooks are better rated. This is not a recommendation for purchase.