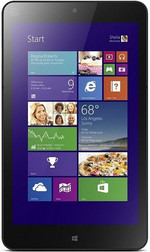 Model: The Lenovo ThinkPad 10 Z8700 is a tablet which provides opportunities to play and sit on the Internet, conduct a business presentation and much more, all in one device. Lenovo declared that this product has all the capabilities of a laptop, which is proved by what is featured on this tablet: Windows 10, Intel Atom Z8700 processor, 4G module, expandable memory up to 128 GB and dTPM encryption. It has a modest design but with a few special decisions by the appearance. Most notably, the top two edges of the tablet have a rounded shape, while the two lower ones are sharp. The color of the device is graphite. Its cover has a rubberized coating, so it prevents the tablet from slipping out of hands. In the upper left corner, it has a camera, bordered in red. Opposite of the camera it has the ThinkPad line logo. At the bottom of the tablet, there are two small slits of the speakers while in the middle, a fingerprint scanner can be seen. The front view is more minimalistic. The screen is surrounded by a relatively thin frame. There is a front camera on its upper edge and a Windows button on the bottom.

As for the display, the screen has a resolution of 1920x1200 pixels and a pixel density of is 224 ppi. The screen is protected by Corning Gorilla Glass to protect from minor scratches and damages. The touch screen supports a 10-finger multi-touch and reacts quickly to commands. Another advantage of the display is the IPS matrix. The display output produces a clear, bright, saturated picture regardless of the viewing angle. However, the screen has a glossy surface. In sunny weather, there is a need to increase the brightness to a maximum. The Lenovo ThinkPad 10 Z8700 runs the Windows 10 Pro 64-bit operating system. At the core of the tablet is the Intel Atom x7-Z8700 quad core chip based on the Cherry Trail platform. It works at 1.6 to 2.4 GHz and is processed in 14 nm technology. The processor has 2 MB of 2nd level cache and is known for low power consumption. For the graphic processor, it uses the integrated Intel HD Graphics (Cherry Trail) with up to 600 MHz. It supports DirectX 11.2 and copes well with decoding. The RAM provided is 2 GB of DDR3-1600 MHz and the internal memory is 64 GB. For expanding storage, the tablet supports memory cards up to 32 GB. The device comes with a 2-cell lithium-polymer battery with a capacity of 3250 mAh. In the reading mode (minimum brightness, Wi-Fi off), the device will last almost 15 hours. For more intensive work involving web surfing with a brightness of 50% of the maximum and higher, the user will obtain a battery life of about 7 hours.

Intel HD Graphics (Cherry Trail): Integrated graphics card in the Cherry-Trail SoCs. Based on a Broadwell GPU (Intel Gen8) and supports DirectX 11.2. Depending on the SoC offers 12 or 16 EUs.

Z8700: Soc with an integrated quad core Atom processor clocked at 1.6 - 2.4 GHz, an Intel HD Graphics GPU and a dual channel LPDDR3-1600 memory controller.» Further information can be found in our Comparison of Mobile Processsors.