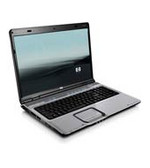 Reviews for the HP Pavilion dv9000

T7400: Former mid range to high end mobile processor based on the Merom core. Compareable to a later produced and more  power efficient C2D P7450.» Further information can be found in our Comparison of Mobile Processsors.

NVIDIA GeForce Go 7600 is part of the most powerful third of mobile video cards. It can represent newest games well and no doubt is apt for office applications and surfing.

The Core 2 Duo is a successor of Core Duo and Core Solo with a longer pipeline and up to 20% speed increase without to spend more current. 64-Bit EM64T command upgrade and 2 or 4 MB L2 cache characterize this processor with its 291 millions transistors, which are finished in 65 nm.
The "T" variants of the Core 2 Duo are the standard versions in notebooks. They need less current than the "E", but more current than the "L" (low voltage) and "U" (ultra low voltage) variants.

Nowadays meanwhile the 17 inch display size is a more frequently offered standard format for desktop-replacements. The DTR-Laptops can't be carried easily, need much current, but on the other side texts can be read easily and high resolutions are no problem. DTR mainly are intended for stationary usage on desks, where the weight and the energy need are unimportant.

The weight of this laptop is above average compared with the mass of other notebooks. The weight is about average for this display size.

HP is one of the biggest international manufacturers according market shares and reviewed models at the German- and English-speaking market. HP notebooks are often in top positions according price/value ratings.

English Reviews in the Internet