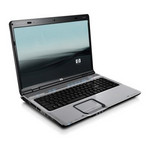 Reviews for the HP Pavilion dv9341eu

HP has been something of a revelation in recent months, releasing a number of great notebooks that have hit different price points but have always hit their target market firmly and squarely. So it comes as something of a surprise to find the dv9341eu falls short. The look is great and considering the bargain price, so is the build quality. The body feels solid and there is plenty of support holing the screen in place. Being a big machine, the keyboard has plenty of space and there is even room for a separate numeric keypad. The keys weren’t the most solidly built we’ve seen of late and while they were comfortable to use, there was a degree of rattle as we typed. As a 17-inch machine with a widescreen Super-TFT panel, this notebook isn’t designed to be too portable, so the weight of 3.7kg shouldn’t be too hindering. The 2-hour battery life we managed to get wouldn’t be great if it weighed half as much but for using out in the garden, or on the sofa as we did, it’s more than fine. However, this machine is pitched as a desktop replacement or multimedia machine.
7 von 10, Preis/Leistung sehr gut, Display gut, Leistung schlecht
Single Review, online available, Short, Date: 08/20/2007
Rating: Total score: 70% price: 90% performance: 40%

> Notebook / Laptop Reviews and News > Library > Laptop Reviews Archive > HP Pavilion dv9341eu
Stefan Hinum (Update: 2012-05-26)
4
Working For Notebookcheck
Are you a techie who knows how to write? Then join our Team!