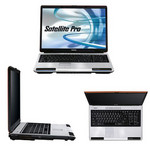 Toshiba's Satellite Pro P100-216 is a well featured, nicely balanced - if a little expensive - mainstream desktop replacement notebook and, although it would have been nice to see a faster CPU installed, it basically does what it's supposed to do and you can't knock it for that.
eher kurz gehaltener Test; online abrufbar