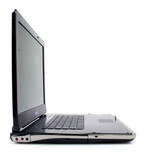 Reviews for the Sony Vaio VGN-AR190G

The first notebooks supporting the next generation of optical media are here, fueling the battle between the two high-definition DVD formats. Sony's $3499 VAIO VGN-AR190G comes with a Blu-ray Disc burner, while Toshiba's $3000 Qosmio G35-AV650 offers an HD DVD drive. Both of these units permit you to watch stunning high-definition movies on their own screens or on a connected HDTV, but we preferred Toshiba's G35-AV650 for its lower price, better ergonomics, and smoother movie-viewing experience. This pricey notebook has a vast screen; plus, its Blu-ray burner lets you write to high-capacity discs and play Blu-ray movies.
umfangreicher Erfahrungsbericht eines Benutzers; online abrufbar

The high-definition media struggles are heating up with Sony's launch of its VAIO VGN-AR190G ($3,499.99 direct) laptop. The world's first Blu-ray–equipped laptop, the new VAIO is Sony's answer to Toshiba's HD DVD laptop, the Qosmio G35-AV650. Both laptops are extremely capable Media Center laptops. Both can play HD content, though only the Sony can record it. And both laptops are plagued by the same issues—stuttering playback (it's the software) and a shortage of content. That said, for early adopters looking for the next hot thing—or anyone who is willing to pay a lot to take HD on the road—the AR190G is a sure thing.
eher kurz gehaltener Test; online abrufbar

Not only is Sony's new VAIO VGN-AR190G Digital Studio the first notebook to feature Blu-ray technology, it's also one of the best equipped multimedia notebooks around. Of course, treating yourself to the latest technology comes at a cost; in this case, you'll pay a whopping $3,499 for the privilege. The 1.3-inch-thick VGN-AR190G is visually stunning in more ways than one. Its sleek-looking glossy black exterior is offset by a silver VAIO logo with matching silver trim and port covers, but it's the 17-inch widescreen display that really catches the eye.
ausführlicher Test mit Geräteaufbau und Testwerten und Bildern; online abrufbar