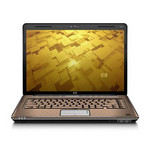 Reviews for the HP Pavilion DV5-1199EG

51%: Such a bad rating is rare. There exist hardly any notebooks, which are rated worse.