Reviews for the HP Pavilion dv7-1285dx

HP's Pavilion dv line of multimedia laptops, available in 14-, 15-, and 17-inch versions, consists of attractive systems aimed at mainstream consumers with a heavy diet of videos, music, and other forms of media. To this end, they share features, such as Altec Lansing speakers, HDMI outputs, and touch-sensitive media control buttons, along with mirror-finish accents. HP's Pavilion dv7-1245dx is a slick multimedia machine with great battery life, but for $1,200, we want a full 1080p display.
70, Mobilität 80
Single Review, online available, Medium, Date: 03/25/2009
Rating: Total score: 70% mobility: 80% 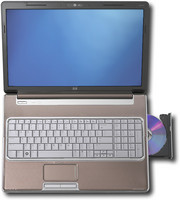