Reviews for the HP Pavilion dv3-2150us

Shrink the system and bulk up the battery: It's not rocket science, but it's a winning recipe for portable PC design. HP does it with the Pavilion dv3-2150us ($849.98 list), which reduces the company's desktop-replacement media-center platform—complete with infrared remote control—to a 5-pound, 13.3-inch form factor and adds a long-lasting 9-cell battery. It's not as slim and elegant as our Editors' Choice Acer Aspire 3935 (6504) or Apple MacBook Pro 13-inch, but it works, and it's reasonably priced to boot. A compact laptop with a big battery, the HP Pavilion dv3-2150us is an appealing alternative to its big-screen multimedia centers.
Single Review, online available, Medium, Date: 07/10/2009
Rating: Total score: 70% 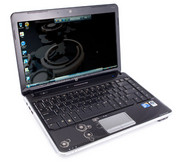