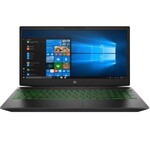 NVIDIA GeForce GTX 1650 Mobile: Mid range dedicated graphics card for laptops based on the desktop GTX 1650 and therefore the Turing architecture (TU117 chip in 12nm FFN) without raytracing and Tensor cores. Available with 896 and 1024 shaders.

R7 3750H: Mobile Quad-Core APU using Zen+ cores clocked at 2.3 to 4 GHz and a Vega graphics card with 10 CUs clocked at up to 1400 MHz. The 3750H is the 35 Watt version of the 3700U with the same specs but a higher TDP for better performance under long periods of load.» Further information can be found in our Comparison of Mobile Processsors.