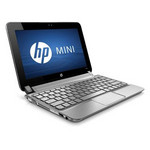 Battery power, on the other hand, is a huge selling point at about 9-10 hours of battery life, which blows past pretty much all other competitors. The 6-cell battery that HP provides with the HP Mini 210-2180 is one of the best we've seen in this class of netbooks.
Single Review, online available, Very Short, Date: 02/28/2011
Rating: Total score: 70%