HP's Mini 110-3530nr offers some very unique features for a netbook that can be found under $300. It comes with an anti-glare screen that makes working outside easier, a faster hard drive and a six cell battery pack for extra running time. While all these features are great, there are a few items that are very disappointing including just 1GB of DDR2 memory that can't be upgraded that greatly impacts performance and a keyboard that isn't a nice as HP's slightly more expensive netbooks.
Single Review, online available, Short, Date: 02/11/2011
Rating: Total score: 60% 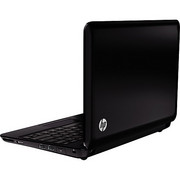