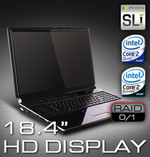 Reviews for the Eurocom M980NU

There is no question that the M98NU XCaliber is an excellent machine for gaming, watching HD video, and for great-sounding audio (for music, movies, and gaming). But if you're willing to spend more than five grand for a notebook, make sure you do your homework before you commit to such a large purchase. Whenever you configure a system with top-of-line components, you almost always pay a premium for such components--you often wind up paying a lot for a relatively small gain in performance. Also, as the M98NU XCaliber is an OEM notebook from Clevo, you might want to check out other OEMs who sell the same model--they might have better deals or perhaps better warranty policies.
Single Review, online available, Very Long, Date: 10/14/2009
Rating: price: 40% performance: 95% display: 60% mobility: 40%
76% Eurocom M980NU Xcaliber
Source: Computer Shopper

Known for its mobile workstations and powerful desktop-replacement laptops, the Canadian firm Eurocom recently added the M980U XCaliber to its stable of performance notebooks. This high-end 18-inch gaming notebook is chock-full of premium components, including a quad-core CPU, dual graphics cards, a recordable Blu-ray drive, and a solid-state hard drive. The XCaliber is a massive gaming notebook with quad-core processing, a great 18.4-inch LCD, and fast SLI graphics, but it's just too expensive.
Single Review, online available, Long, Date: 10/01/2009
Rating: Total score: 76%

The GeForce GTX 280M is based on the G92b chip with all 128 pipelines and, as a result, shares more similarities to the desktop 9800 GTX+ than the desktop GTX 280. Regardless, the high clock rate makes the GTX 280M considerably faster than the 9800M GTX.

T9900: Fastest (in 2009) Core 2 Duo Dual Core CPU and similar to the Core 2 Extreme X9100 (withouth the free multiplicator, but instead less TDP and cheaper). Very well suited for games and demanding applications. » Further information can be found in our Comparison of Mobile Processsors.

Eurocom: Eurocom has been a UK-based video game developer founded specifically to develop games for the Nintendo Entertainment System. Later, Eurocom has expanded to other platforms and also sells laptops with own brand. The official location of the company is in Canada. Subsidiaries in USA exist. According laptops, Eurocom focusses desktop replacement laptops for the sell regions Anglo-America and UK. The laptops are not reviewed too often and the market share is very low. The ratings have improved recently (as of 2016).