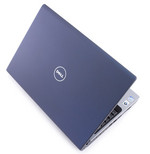 Reviews for the Dell Studio 1737

Dell's Studio 17 laptop design has been around for some time now and the company has finally updated some core components to keep its performance levels up. The touchscreen may be a nice addition for some but the lack of much software to take advantage of it makes it more of a novelty than useful. At this price point, most users will be better served by going with the Inspiron 17 for general purpose or the Studio XPS for graphics.
Single Review, online available, Medium, Date: 07/12/2010
Rating: Total score: 60%
90% Dell Studio 17 (Multitouch)
Source: PC Mag

The best part about a media center laptop is that you almost never have to worry about feature and performance limitations. Yeah, it's deskbound and unlikely to see the inside of a backpack, but its size means you can cram in all the newest technologies, with few restrictions. The Dell Studio 17 ($1,411 direct) has a mind-numbing list of current and new technologies, the most compelling of which is a 17.3-inch widescreen that supports multitouch and an Intel quad-core processor that can bolt through any hardcore application. All this earns the Studio 17 our Editors' Choice in the media center laptop category.
Single Review, online available, Short, Date: 06/11/2010
Rating: Total score: 90%
70% Dell Studio 17 touchscreen notebook
Source: Reg Hardware

Dell’s done well to bundle some fast components with a 17.3in screen while keeping everything tantalisingly close to the £1000 mark. And although I’m not sold on the idea of touchscreen laptops, the fact Dell isn’t charging a huge premium for it means the laptop’s overall score isn’t affected too much. Personally, though, I’d be very tempted to ditch the touchscreen in favour of the version with faster graphics and the dual-core i7-620M processor.
Single Review, online available, Medium, Date: 05/05/2010
Rating: Total score: 70%
80% Dell Studio 17 notebook
Source: Pocket Lint

This is an effective desktop replacement with a glorious big, high-resolution screen and good sound capabilities. It works fast and efficiently. In fact, the only part of the package that doesn't impress entirely is the touchscreen. It's not bad, exactly, but not as responsive as it could be. If you have a touch-sensitive phone like the Google Nexus One or the iPhone, it may disappoint using the multi-touch screen here because it's not as quick to respond as it should be. The keyboard is too spongy for comfortable typing, but this is one of only a small number of disappointments on a big, powerful machine.
Single Review, online available, Short, Date: 04/19/2010
Rating: Total score: 80%
Dell - Studio 17
Source: IT Reviews

The new Studio 17 is an impressive laptop, but we're not totally convinced there's a big market for touch-screen laptops. Although fun at first, it wasn't long before we cast the touch-screen controls aside in favour of the keyboard and touch pad method. On the plus side, it's reasonably priced considering the fast processor, large screen and mid-range graphics card, so it's not like you're paying a huge premium for the touch-screen.
Single Review, online available, Medium, Date: 04/14/2010
Rating: price: 80% performance: 70% display: 80%
70% Dell Studio 1737 (s1737-USE0145)
Source: PC Mag

If you can spot the Dell Studio 1737 (s1737-USE0145) ($749.98 list) in your local Staples, your eyes are already locked in on the prize: Its sweet, delectable 17-inch widescreen will dazzle you, and its 4GB of memory should be ample for your needs. For performance seekers, however, the system's budget processor and Intel integrated graphics might be deal breakers. Otherwise, it's one of the most affordable desktop replacements laptops around. The Dell Studio 1737 (s1737-USE0145) is a terrific 17-inch media center for those non-performance-seekers and value shoppers.
Single Review, online available, Medium, Date: 07/08/2009
Rating: Total score: 70% 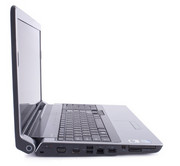 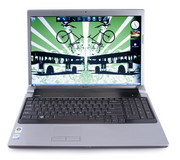 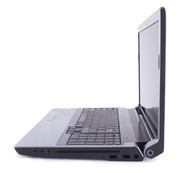 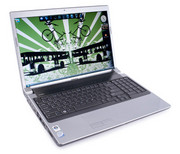