The Asus Memo Pad 8 isn’t a bad tablet at all. Performance may be a little lacklustre, but screen quality and battery life are good, it’s handsomely designed and storage is expandable, thanks to the microSD slot. Its key problem is that – while it does everything perfectly well – the Nexus 7 is superior in most departments. Unless memory expansion is absolutely critical, we’d spend the extra £20 and opt for the A-List title holder.
Single Review, online available, Very Short, Date: 04/16/2014
Rating: Total score: 67% price: 50% performance: 67% features: 67% workmanship: 67%
80% Asus Memo Pad 8 review
Source: Expert Reviews

The Asus MemoPad 8 is a little cheaper than the Asus-built Google Nexus 7, but each tablet has its benefits. The Nexus 7 has a higher screen resolution, more powerful components and the latest version of Android, while the MemoPad 8 has a physically bigger screen, microSD card expansion and much better battery life. If you're looking to play games and don't mind occasionally managing your apps to free up space, the Nexus 7 is still a fantastic buy, but if you simply want a tablet for watching videos and general use, the MemoPad 8 is a great alternative.
Single Review, online available, Short, Date: 03/21/2014
Rating: Total score: 80%
75% Asus MeMO Pad 8
Source: Good Gear Guide

The Asus MeMO Pad 8 isn’t just another me-too Android tablet. Unique software additives and Asus’ sense of evolving style give it a well defined personality. For its size it packs a hearty hardware punch, and on value it is only surpassed by one other tablet: the Asus-made Nexus 7.
Single Review, online available, Long, Date: 02/06/2014
Rating: Total score: 75%

The Asus Memo Pad 8 ME180A-1A016A comes with a quad-core ARM Cortex-A9 processor clocked at 1.8 GHz. The processor, although not best of the bunch, is capable of providing smooth usage for casual applications and games. The ARM Mali-400 MP graphic card is again, not a great one, but sufficient for casual daily usage. The device has a native memory of 16 GB and allows expandable storage with an external micro SD card.

The 8 inch display is rather good as well for its price. It features a 1280 by 800 pixel resolution, which is average at best, but has good viewing angles, sharp colors and good brightness. The touch screen is also responsive. The tablet’s size and weight is suitable to be held in your hand and still provide a big enough screen for reading comfortably.

The design of the Asus Memo Pad 8 ME180A-1A016A is pretty standard. It doesn't feature a full metal build, but the plastic casing is well made to make the tablet feel less fragile. In short, the Asus Memo Pad 8 ME180A-1A016A is a tablet designed more for casual users who read and watch videos rather than play high end games. Another thing to note is that the device does not come with 4G or HDMI.

ARM Mali-400 MP: OpenGL ES 2.0 graphics card for ARM SoCs that is scaleable from one to four fragment processors and has got one vertex processor. Mainly used in conjunction with ARM A9 cores in tablets and smartphones.

77.33%: This rating is not convincing. The laptop is evaluated below average, this is not really a recommendation for purchase. 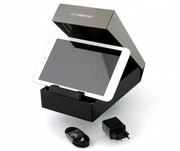