Considering new releases like Acer’s Predator Helios 300 at about the same profile and near-identical specs (even the i7 variant goes for around 69k nowadays) but with better performance, it’d make you think a lot. However, this is ASUS that we’re talking about. Tried and tested local after sales have proven why they have always done a podium finish.
Single Review, online available, Long, Date: 07/30/2017

Model: The Asus GL553VD-FY040T is definitely aimed at budget-minded gamers. Armed with a Nvidia GeForce GTX 1050, the GL553VD won't offer the same gaming performance as its bigger brothers, the GL502VM and GL502VS. However, it also won't break the bank. A hallmark of the Asus Strix line is its build quality, and the GL553VD is no exception. The lid is covered in a black brushed aluminum finish adorned with a bright orange ROG logo, which lights up when the screen is on. The decoration is subtle compared to previous Asus gaming laptops but will definitely stand out. The aluminum lid is also a fingerprint magnet; oils and smudges are highly visible and require some effort to wipe off. Overall, the lid looks and feels great. It can be opened with one hand. Armed with a 2.8 GHz 7th-gen Intel Core i7-7700HQ CPU, 16 GB of DDR4 RAM, a 128 GB M.2 SSD, and a 1 TB, 7,200 rpm HDD, the Strix is a fine multitasking machine. Games at highest settings is not possible, but its Nvidia GeForce GTX 1050 GPU with 4 GB of VRAM will handle most titles at normal to slightly higher than medium settings. The 15.6-inch, 1080p anti-glare screen of the Strix is sharp and colorful. It has 178° viewing. The display reproduces an excellent 122 percent of the sRGB color gamut, far surpassing the mainstream-notebook average (91 percent).

The keyboard of the Strix is extremely comfortable for gamers thanks to its deep 2 millimeters of travel and 62 grams of required force to depress the keys. This Strix is one of Asus' first gaming laptops to boast RGB backlighting. A user can customize the lighting in the ROG Aura Core app, which lets the user assign different colors to four different zones, giving the keyboard a mechanical feel. Asus preloaded the Strix with a variety of useful gaming software. Most notable is the ROG Gaming Center, the go-to spot for everything affecting performance, including temperature and CPU and GPU memory. It also includes options to boost fan speeds and disable the Windows key while gaming. Another gaming program, GameFirst IV, lets user prioritize programs and games' access to the network to reduce lag while user play. These tools are really useful for those who’d like to maximize the performance. Connectivity is reasonable for a 15.6" gaming notebook. On the left are a Gigabit LAN port, an HDMI port, two USB 3.0 Type-A ports, a USB 3.1 Type-C port, and a 3.5 mm combo audio jack. The Type-C is only Gen 1, meaning that it lacks Thunderbolt 3 support. As such, external graphics solutions and other peripherals that require high bandwidth will not be fully supported. The right side is more modest, sporting only a single USB 2.0 port. The rest of the right side is taken up by the DVD-RW drive, which is a rare thing these days. It gives an additional output and input medium but comes at the cost of adding size and weight to the laptop. The SD card slot is located up front. The Asus GL553VD-FY040T gives the people who can’t afford the price tag of serious gaming machines a chance to play their games at lower settings. This is more than enough for most people in this range.

NVIDIA GeForce GTX 1050 Mobile: Mainstream graphics card based on Nvidia's Pascal architecture and successor to the GeForce GTX 960M. Is manufactured in a 14nm process at Samsung and the technical specifications are very similar to the desktop version.

i7-7700HQ: Quad-core notebook processor based on the Kaby Lake architecture. Besides four CPU cores (including Hyper Threading), the chips also integrates the HD Graphics 630 GPU and is manufactured in an improved 14 nm process.» Further information can be found in our Comparison of Mobile Processsors. 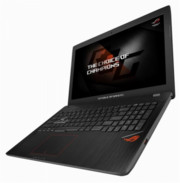