We might be reaching the point where gaming laptops are no longer overpriced behemoths, but fairly affordable desktop replacements that also happen to be good for gamers on the go. The 15.6-inch Asus Republic of Gamers GL551 looks promising in a stealthy or modest way, but proves to be just an average—if very affordable—gaming laptop.
Single Review, online available, Medium, Date: 01/16/2015
Rating: Total score: 60%
70% The best entry-level gaming laptop available
Source: Techradar

Save for the display, the Asus GL551 is a sweet package for its $1,099 price tag. Nothing about this portable rig screams budget machine. In fact, there's much more apparent Republic of Gamers branding, if anything. For the price, the GL551 delivers above average gaming performance with plenty of oomph to get gamers through the sooty plains of Mordor or the heavy metal war of Titanfall. Even with the subpar screen, I would suggest you pick the Asus GL551 over the Lenovo Y50. Having reviewed both laptops, I can say they share similarly terrible displays, and the only thing the Y50 has going for it is its brushed aluminum body. Meanwhile, the Asus machine ekes out just as much performance for a matching price, with a better battery life to boot.
Single Review, online available, Long, Date: 09/30/2014
Rating: Total score: 70% price: 80% performance: 80% features: 80% workmanship: 60% 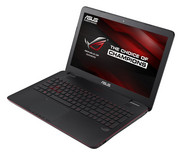