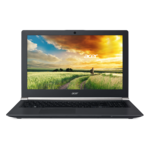 So, here we are again at the end of a review. I'm pretty sure you all know what's about to happen, so take a read or skip to the bottom to see the bottom line ranking. Let's talk performance. The V Nitro first and foremost is a gaming system. It's being marketed as such, so it better perform as such. And indeed it does. We see decent gaming performance, though it could always be improved by including a faster GPU. However, with the GPU used, gaming performance is plenty for a system that is made to go on the road easily.
Single Review, online available, Very Long, Date: 11/28/2014
Rating: Total score: 94% price: 90% performance: 92% features: 98% workmanship: 95%

Acer's latest attempt to woo the gaming community comes in the form of the brand new Acer Aspire V15 Nitro Black Edition VN7-591G-74SK gaming laptop. The exterior has a black matte finish, hence the "black edition" in its name. Like many other new laptops, a DVD optical drive is excluded to make the laptop lighter and thinner. The design is surprisingly slim for a gaming laptop at just under 2.54 cm thick, which looks unreal from the side. It is light and portable, weighing in at only 2.2 kg.

The Acer Aspire V15 also comes with a 15.6 inch IPS screen with 1920x1080 pixels, just the right amount to look great without straining its hardware. The hardware is of course top of the line: a powerful Intel Core i7 quad core processor, 8 GB RAM and an 860M Nvidia graphics card.

The Acer can run even the most demanding video games in the market smoothly. The battery life lasts anywhere between 2 to 4 hours depending on usage, which is pretty respectable for a gaming laptop with this hardware, though there is still room for improvement.