There is no denying that the Asus ROG G750JZ laptop is a gaming powerhouse. The Intel Core i7 4860HQ and Nvidia’s powerful 8GB GTX 880M combine to produce a formidable pair that power the 17.3″ 1920×1080 display with solid frame rates. As powerful as the GTX 880M is, its performance has been undermined by Maxwell’s efficient and fast GTX 970M, in recent weeks. The latter produces higher frame rates on average, and it does so while consuming less power. That’s a testament to the speed at which graphics technology is moving in the mobile market.
Single Review, online available, Very Long, Date: 11/01/2014
Rating: Total score: 80%
100% Asus G750JZ review
Source: Expert Reviews

The Asus G750JZ is an expensive gaming laptop, but if you want a machine that achieves the highest levels of performance that you can take to the occasional gaming event, the Asus G750JZ is the laptop for you. If you want something a little thinner, the Aorus X7 is a good alternative, being extremely sleek and powerful, even though it has two GeForce GTX 860M GPUs working in SLI mode.
Single Review, online available, Very Short, Date: 09/09/2014
Rating: Total score: 100%
70% Asus ROG G750JZ review
Source: PC Pro

For the most part, we were extremely impressed with the Asus ROG G750JZ. It’s by no means cheap, but it sports some of the finest mobile components money can buy, and for considerably less than similarly specified machines from rival brands such as Alienware. That said, we simply can’t excuse such a mediocre display on an £1,800 laptop. With a better display, the Asus ROG G750JZ would be a tour de force, but as it stands, we’d sacrifice all-out power and plump for the MSI GE70 2PE Apache Pro – it’s by far the better all-round machine.
Single Review, online available, Very Short, Date: 08/08/2014
Rating: Total score: 70% price: 50% performance: 100% features: 67% workmanship: 67%

Gaming enthusiasts have no doubt heard of this notebook, made specifically for them to enjoy their tactical sessions to the fullest. It is purposefully designed to be solid and tough, with a thickness of around 50 mm and weight of 4.8 kg, meant to withstand the usual heavy jolts and shocks gamers apply to their keyboards. The screen is a large 17.3 inch. It features an anti-glare layer to enable gaming in any light.

The keyboard sports a backlight for those who love to play in dim light. The slanted surface will ease the strain on gamers' wrists during long gaming sessions. There are twin rear vented thermal fans to deal with the expected heat buildup from its 2.4 GHz Intel Core i7-4700HQ quad core processor. Other features that would definitely excite gamers include the 8 GB 1600MHz DDR3 RAM and 1 TB, 2.5-inch 5400RPM hard drive.

Overall, it looks pretty nice and any gamer would be more than proud to lug it to a LAN party, or even a tournament. The only downside to the Asus G750JZ-T4110H is its high price, well out of the range of many students, or fresh graduates. Nevertheless, those passionate enough will definitely find the means to obtain this unique gamer-centric notebook.

4860HQ: Haswell-based quad-core processor clocked at 2.4 GHz with Turbo Boost support up to 3.6 GHz. Offers an integrated Iris Pro Graphics 5200 GPU and a dual-channel DDR3 memory controller.» Further information can be found in our Comparison of Mobile Processsors. 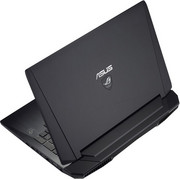