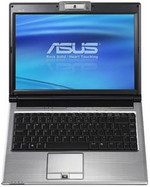 Reviews for the Asus F8VA

It should be obvious by now that the F8VA is capable of dual duties; desktop replacement and media machine alike. But the sad fact is that it doesn’t excel at either. As a desktop machine the price is too high, and it’s too heavy to take on the road. The battery won’t last the trip either. Yet as a multimedia machine, it needs a bigger screen to make the most of the Blu-ray drive and speedy processing power. However, if you need a laptop that spends equal time in both the study and the lounge room, overlooking these minor flaws shouldn’t be too hard if it saves you from buying two separate machines.