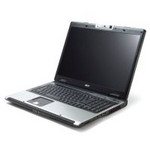 Reviews for the Acer TravelMate 7514WSMI

NVIDIA GeForce Go 6100: The NVIDIA GeForce Go 6100 / 6150 is an integrated graphics card of the NVIDIA nForce Go 430 MCP for AMD Turion notebooks. It doesn't have any integrated memory, but uses a part of the mainmemory (up to 128 MB) like the direct competitor Intel GMA 950. Therefore, the gaming performance is quite moderate and can only be used for elder games.