Is the Acer Chromebook 13 the best Chromebook on the market? That's a tough one. I can't claim to have tried them all, but I'll admit I was impressed. So is the 1920 x 1080 version the model to get? For my eyes, the extra pixels make the menu and tab text too small on a 13-inch display. Still, the extra 16GB of storage might come in handy but having a full-depth SD card slot will plug the gap for most people. Also, I didn’t notice any extra benefit from the additional 2GB of RAM, but I suppose it adds a level of future-proofing if you're likely to hang on to it or pass it on.
Single Review, online available, Short, Date: 01/16/2015

The Acer Chromebook 13 (CB5-311-T9B0) is definitely notable among its peers, if only for its new processor and larger full HD display, but it doesn't offer a significantly improved experience, and the experience is everything when dealing with Chromebooks. The new CPU may promise better gaming support, but there's not much out there now that takes advantage of it, and the laggy media performance didn't leave us too thrilled. The smaller Acer Chromebook C720P-2600 remains our Editors' Choice, due to its smoother performance and touch screen, but if you want a larger Chromebook with a nice display, the Chromebook 13 is a pretty good bet.
Single Review, online available, Very Short, Date: 09/25/2014
Rating: Total score: 100%

The Acer Chromebook 13 CB5-311-T9B0 is a slick, lightweight device with decent functionality. The white chassis with black island keyboard represent the look of a standard modern device. Running on the Chrome OS, the Chromebook is packed with an Nvidia Tegra K1 quad-core processor clocked at 2.10 GHz, 2 GB DDR3L SDRAM and Nvidia Kepler graphics with shared memory.

The 13.3 inch Active Matrix TFT Color LCD with FHD resolution delivers good colors and clarity. The Acer Chromebook 13 CB5-311-T9B0 also comes with an internal SSD of 16 GB. Capacity is scarified in order to keep the device light and fast. Users can expand memory capacity with an SD card.

K1: System on a Chip (SoC) for smartphones and tablets. Integrates a 4+1 Cortex-A15 CPU as well as a Kepler-based GPU with 192 CUDA cores.» Further information can be found in our Comparison of Mobile Processsors. 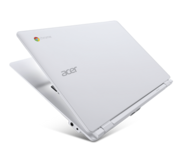 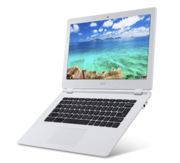 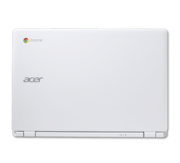 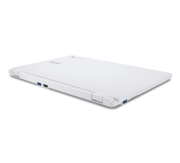 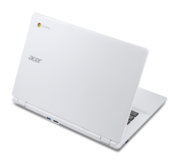