The Acer C7 is altogether a more powerful and capable machine than its Samsung rival, but the downside is that battery life isn’t stellar. We can’t run our standard laptop-based tests on Chromebooks, but, even with the screen dimmed a little, we were able to extract only four to five hours’ work time from the C7. You can expect an hour or so more in offline mode.
Single Review, online available, Short, Date: 06/04/2013
Rating: Total score: 83% price: 100% performance: 67% features: 67% workmanship: 67%
60% Acer C7 Chromebook review
Source: Trusted Reviews

If you’re particularly precious about the number of keys you have under your fingertips, the size of your hard drive or the brightness of your screen - but aren’t concerned with what your laptop looks like - then by all means, check out Acer’s take on the Chromebook. Otherwise, you’d be better off stumping up the additional £30 for the Samsung Series 3.
Single Review, online available, Medium, Date: 04/23/2013
Rating: Total score: 60%
Review: The ultimate Chromebook challenge
Source: Reg Hardware

Has Google cracked the Chromebook second time around? Just about. Clearly you need to be in the market specifically for a cheap and smallish machine for day-to-day web surfing and some light media consumption, but assuming you are then both of these machines do a good job and the price is certainly right. In a nutshell, then, the Samsung is the purer Chromebook, but the Acer is the better cheap laptop.
Comparison, online available, Medium, Date: 02/19/2013

Well, you might just prefer having a familiar laptop experience, complete with keyboard and trackpad, and if you're already living the Google life with Docs, Calendar, Gmail, Hangouts, Google+ and more, you'll immediately feel at home as soon as you sign into a Chromebook. And that's fine. If that's you, we think you should consider one. Basically, then, we like the idea of a Chromebook; we just don't particularly like this Chromebook. At least, we don't particularly like the Acer C7 Chromebook as a Chromebook.
Single Review, online available, Long, Date: 01/22/2013
Rating: Total score: 50%
80% Acer C7 Chromebook review
Source: T3

Versatile, rugged and surprisingly stylish, the Acer C7 Chromebook is an amazing achievement for £199, especially as 100GB of cloud storage costs half the price of this Chromebook via rivals. It gets the basics right - decent screen, usable keyboard and has all the inputs and outputs you need when on the go. The Chromebook OS is still struggling for apps and, really, that's the only downside to an otherwise polished performer that shows little signs of compromise for the budget price tag.
Single Review, online available, Very Short, Date: 01/21/2013
Rating: Total score: 80%
Acer C7 Chromebook Review
Source: AnandTech

I wanted to really dislike this experience, and in many ways it was compromised. But much of that is just a matter of having to live in the browser. Right now, on my MBP I have three browser windows with around two dozen tabs open. I have VLC open for playing some videos while I work, OpenOffice for reading documents that don't get along with Google Docs or TextEdit, Lightroom, Twitter, Scrivener about a dozen TextEdit windows, and Spotify.
Single Review, online available, Medium, Date: 01/21/2013

Still, we can see people taking the plunge and buying the Acer C7 simply because it packs so much in for so little. It costs £194 - £30 less than the Samsung - and thanks to its sizeable hard disk and Chrome OS’s offline capabilities, it could be all the laptop many people need. For anyone requiring a machine for basic computing and browsing the web, it’s a bargain.
Single Review, online available, Very Short, Date: 01/17/2013
Rating: Total score: 83% price: 100% performance: 67% features: 67% workmanship: 67%
60% Acer C7 Chromebook review
Source: Pocket Lint

Although the Chromebook concept is a partial success, there are too many fundamental errors with Acer's C7 laptop for it to score well. It might well be a budget purchase, but the screen has a poor viewing angle, battery life isn't great and the keyboard is hit and miss for typing - all of key importance to a device such as this, and all short of the acceptable threshold in each case. There's also no 3G option for on-the-go connectivity.
Single Review, online available, Short, Date: 12/17/2012
Rating: Total score: 60%
60% Acer C7 Chromebook Review
Source: Techspot

To be fair, the C7 has advantages as well. The Samsung is equipped with only 16GB flash storage to the C7’s 320GB HDD. Both come with the aforementioned 100GB of Google Drive space. The C7 also holds a one-port USB advantage over the Samsung, but it’s worth mentioning that one of the two USB ports on the Samsung is a 3.0. Rounding things out, the Samsung has Bluetooth and the Acer does not. The Samsung is simply a better computer and it’s worth the $50 price premium.
Single Review, online available, Medium, Date: 12/13/2012
Rating: Total score: 60%
70% Acer C7 Chromebook (C710-2847)
Source: PC Mag

Acer’s C7 Chromebook is a stunning value. The only major sacrifice a buyer has to make is accepting the Chrome OS, which is becoming easier over time. Chrome OS is now capable of performing all the basic tasks the average user requires and many apps can be used offline. It’s a shame, then, that portability is exactly where the C7 falls short.
Single Review, online available, Long, Date: 11/30/2012
Rating: Total score: 85%
50% Acer C7 Chromebook Review
Source: Laptop Mag

The Acer C7 Chromebook has an extremely tempting price, but it's not the best Google-powered laptop out there. This machine does have some advantages over the latest Samsung Chromebook, including a roomier hard drive (320GB versus just 16GB), more and easier-to-access ports, and a slightly faster CPU. However, we would much rather own the Samsung Series 3 Chromebook.
Single Review, online available, Long, Date: 11/30/2012
Rating: Total score: 50%
Acer C7 Chromebook Review
Source: Liliputing

A year ago it was tough to recommend buying a Chromebook. With prices starting at $450, it was hard to explain why you’d buy a laptop that only runs a web browser when you could spend the same amount or less on a notebook with a more versatile operating system... and which could also run Chrome as an app.
Single Review, online available, Long, Date: 11/29/2012

Whether you're interested in cloud-based computing on a budget or you're just curious about Chrome OS, there's never been a more affordable selection of Chromebooks. Acer's $199 system certainly wins on price, but it looks and feels extremely cheap. It offers a fast processor along with Ethernet and VGA connectivity, but at the expense of a glossy screen, poor keyboard layout and lackluster battery life.
Single Review, online available, Long, Date: 11/26/2012

Acer has succeeded in boiling out all the high-end features that make a notebook cost more than $400 and took Google’s Chrome OS to just about as standard and basically acceptable place as they possibly could, tagging it with a very suitable $199 pricetag. If you only want to browse the web with your notebook, and that’s it, this machine will serve you well.
Single Review, online available, Short, Date: 11/22/2012

This is getting awfully tempting.While netbooks are history and tablets are triumphant, Chromebooks—those low-cost laptops built solely for online access and Web applications—are clawing back from a lackluster start last year.At $199, Acer and Google's newest Chromebook is practically an impulse buy—if not a must-buy—for anyone considering a 7-inch tablet but hoping to do productivity work instead of mere content consumption on the Web.
Single Review, online available, Long, Date: 11/21/2012
Rating: Total score: 70%
58% At $199, you get what you pay for
Source: CNet

Chromebooks are an oddity of the modern computing world: neither tablet nor laptop, and eschewing the concept of apps in the way an iOS or Android user might know them.At $199, the Acer C7 is an attractive proposition for anyone looking for a supercheap portable laptop, but the Chrome OS and short battery life mean you'll have to accept a lot of compromises.
Single Review, online available, Long, Date: 11/20/2012
Rating: Total score: 58% performance: 70% mobility: 40%

Ultra Low Voltage Dual-core processor based on the Sandy Bridge architecture with an integrated graphics card and dual-channel DDR3 memory controller. Due to the Celeron brand, many features of the Sandy Bridge core are deactivated.

67.93%: This rating is bad. Most notebooks are better rated. This is not a recommendation for purchase. 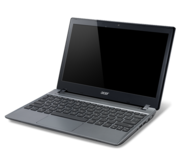 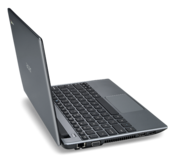 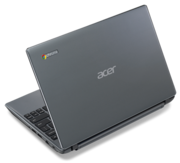 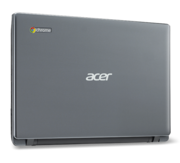