Reviews for the Acer Aspire One 725-C7Skk

The Acer Aspire One 725's so-so battery life and sometimes sluggish performance means it's less pleasant to use than an ultrabook or tablet. Its low price, comfortable keyboard and selection of ports, including USB3, Ethernet and a SD card slot, make it reasonably good value if you want a second computer on a budget.
Single Review, online available, Very Short, Date: 01/27/2013
Rating: Total score: 60%

C-70: Dual Core low power processor with an integrated graphics cards. Due to the low clock speed, the CPU should be only as fast as a single core Atom CPU, but offers a faster integrated GPU.» Further information can be found in our Comparison of Mobile Processsors. 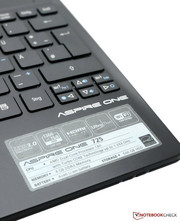