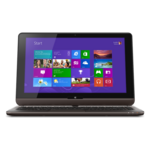 Reviews for the Toshiba Satellite U925T-S2300

Toshiba tried to offer a unique hybrid laptop experience with the Satellite U925t but it just has a few too many small faults or just doesn't quite compare for price and features against most of the other hybrids available. About the best thing going for it is the fast boot times and data loads from its solid state drive. Beyond this, it has less resolution, lower running times, more noise and a keyboard and trackpad that just aren't as good as its competition.
Single Review, online available, Short, Date: 03/06/2013
Rating: Total score: 40%
40% Toshiba Satellite U925t-S2300
Source: Wired Magazine

If this were a $700 device, it’d be easy to recommend the Satellite U925t as a tagalong Windows 8 tablet. But given its limitations in both slate and keyboard mode, it’s a tough sell at a price that puts it at the high end of hybrids.
Single Review, online available, Very Short, Date: 11/27/2012
Rating: Total score: 40%
70% Toshiba Satellite U920T hybrid Ultrabook
Source: Good Gear Guide

Toshiba's U920T sliding-screen hybrid Ultrabook is a neat concept that takes some getting used to. It's a hybrid that's fun to use as a tablet and it works equally well as a notebook. However, we're not sure how well the screen's mechanism will last over time. The unit has good connectivity features, but it's missing a Full HD screen resolution and dual-band Wi-Fi.
Single Review, online available, Medium, Date: 11/15/2012
Rating: Total score: 70%
70% Toshiba Satellite U920T hybrid Ultrabook review
Source: Tech Advisor

Toshiba has taken the hybrid Ultrabook concept and put it on the rails. Its Satellite U920T (PSUL1A-00S001) is a 12.5in, Windows 8 model with a screen that slides over its keyboard base. You can use it as a tablet or as a laptop, but it's designed primarily with the tablet form factor in mind, and the screen is always exposed in an out-facing position to reinforce this usage model. As such, the U920T is one of the first hybrids we've seen to move away from the folding clamshell design.
Single Review, online available, Short, Date: 11/14/2012
Rating: Total score: 70%
Toshiba Satellite U925t review: with its first Windows 8 convertible, Toshiba bets big on the slider
Source: Engadget

You can't see our New York City office right now, but it's something of a laptop menagerie. If Toshiba got one thing right with its first Windows 8 flagship, it's this: there is indeed a market for PCs that can be used as tablets. It's convenient to tuck your Ultrabook's keyboard away when the moment strikes, and turn it into a slate (a big, heavy slate, but a slate nonetheless).
Single Review, online available, Long, Date: 11/09/2012

With the release of Windows 8 only a day away, there are many new computers coming to market including the Toshiba Satellite U925t. While it may look like a laptop, it's also a tablet because the keyboard slides under the 12.5-inch touch screen. You also get a speedy solid-state hard drive and very fast boot times.
Single Review, online available, Very Short, Date: 10/25/2012
Rating: Total score: 60%
79% A clever convertible with a slide-out keyboard
Source: CNet

Like the Sony VAIO Duo 11, the Toshiba Satellite U925t tries to marry a tablet and a notebook into one device, but it's not the most elegant solution. While we like that we can adjust the angle of the display, the sliding motion itself feels awkward. Furthermore, at $1,149, we expect a higher resolution screen, as with the U925t's competitors. The battery life is also short for an Ultrabook.
Single Review, online available, Long, Date: 10/22/2012
Rating: Total score: 50%

58.43%: Such a bad rating is rare. There exist hardly any notebooks, which are rated worse.