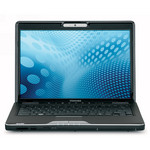 Reviews for the Toshiba Satellite U505-S2970

Archive.org version
The Toshiba Satellite U505-S2970 is a thin-and-light laptop that is neither thin nor light. It feels solidly built, but this is a 13.3-inch laptop that is only a hair lighter than the 14.1-inch Toshiba Satellite E105-S1802. We prefer the larger Satellite; though it costs $50 more for roughly the same components, it features a more comfortable keyboard, better battery life, and a longer warranty. The Toshiba Satellite U505-S2870 is rather tank-like for a 13.3-inch thin-and-light. We'd be more willing to tote it around if its heavy-armor feel extended to the flimsy keyboard.
Single Review, online available, Medium, Date: 11/24/2009
Rating: Total score: 66% price: 70% features: 60% mobility: 70%