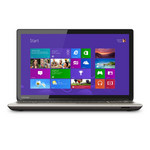 Reviews for the Toshiba Satellite P50t-B-108

Mid-range mobile GPU based on the GCN architecture with GDDR5 memory.

4700HQ: Haswell-based quad-core processor clocked at 2.4 GHz with Turbo Boost support up to 3.4 GHz. Offers an integrated HD Graphics 4600 GPU and a dual channel DDR3 memory controller.» Further information can be found in our Comparison of Mobile Processsors.