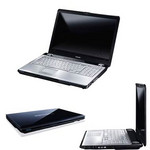 Reviews for the Toshiba Satellite P200

Toshiba's P200 series is a decent home computer. It lacks the oomph and pizzazz that I normally associate with Satellites. This is a brand that is as old and as storied as ThinkPad or PowerBook. I think the spec should be more inspired and innovative. Value is a little tougher to measure. If you are willing to accept the slower performance of AMD’s Turion X2 processor you can buy an HP Pavilion (DV9317CA) with similar specs except for the superior Nvidia 6150 GPU and 2GB of RAM for about $100 less. It might seem like I am rendering a negative verdict against the P200, but that is not really the case.
umfangreicher Erfahrungsbericht eines Benutzers; online abrufbar