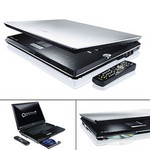 Reviews for the Toshiba Qosmio G30-189

91%: There do not exist many models, which are rated better. The most ratings get ratings, which are a bit worse.