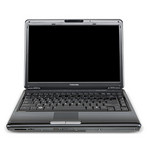 Reviews for the Toshiba Satellite M305D-S4828

The Toshiba Satellite M305D-S4828 won’t blow you away with blazing speed or killer 3D graphics, but it has more than enough horsepower to handle your everyday workload. For less than $900 you get lots of storage, decent graphics performance, and better-than-average audio output, all in an attractive, lightweight package. If you want to trade graphics performance in for longer battery life, you might want to opt for the Intel-powered Gateway T-Series, but overall we like the price-to-performance ratio and design of this notebook.
3 von 5, Leistung gut, Mobilität schlecht
Single Review, online available, Long, Date: 08/29/2008
Rating: Total score: 60% performance: 80% mobility: 40%